The political crisis that shakes Ecuador

By Laurent Puichaud, co-manager at NODOVA

As many of you already know, even if this information didn't have a big place on the news over the past weeks, a big political crisis is currently shaking Ecuador.

Through our company and organisation, we have been bounded to this country for 8 year now. We travel to Ecuador twice a year and are regularly in touch over the phone with the women of the cooperative from the north of the country.
In the beginning of October, the women told us about the strikes that were starting everywhere in the country and which were about to compromise their production delivery to us. We thought it would be a temporary issue. But as the political movement started to get bigger and bigger, it became clear the country was into a crisis much deeper that what appeared on the surface.

After 2 weeks of marches and strikes, an agreement seems possible between the government of President Lenín Moreno and the indigenous leaders leading the marches.
We are going to try to explain, as much as we can, this crisis Ecuador is living.

The following text is based on various newspaper articles, in French and Spanish, as well as the various chat we had over the past few days with the women of the cooperative, actively involved in the strike.

Reasons for the anger: sudden and painful reforms

In the beginning of October, the Ecuadorian President and his government announced the set up of Order 883: a set of economical and social reforms, effective immediately, we can sum up in 3 distinct parts:

Following the raise of petrol price, national transporters immediately went on strike to call for the order's abrogation.

In Ecuador, everyone uses cars or buses. No more transport means a large part of the population can't move anymore, shops can't be refilled. People started to rush for provisions as prices started to rocket.

Facing a strike that was paralysing the country, President Moreno quickly decreed State of Emergency for 60 days over the entire country (allowing him to summon the army and police force, as well as press censorship) in order to quickly contain the protests, and moved the entire government to the city of Guayaquil, afraid of retaliation. Unfortunately for him, this decision triggered the people's anger. 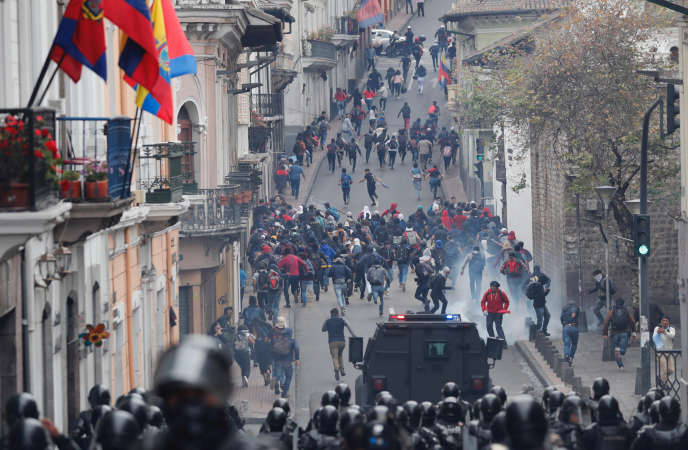 To understand how important this uprising is, we need to understand how the Ecuadorian people is represented and protests: Ecuador is a country composed of various indigenous populations, culturally different and proud of their traditions (as the kishwas we learnt to know). Around 14 different indigenous populations compose Ecuador (27 counting the different kishwa nationalities). Each of those populations has representatives, who gather since 1986 in the Confederation of Indigenous Nationalities of Ecuador (or CONAIE). This confederation aim to correctly represent the revendication of its various people on the political stage.

It was the CONAIE representatives, as it already happen various times in the past, that decided to come to the capital to join the transporter marches, bringing with them waves of Ecuadorian people behind them.
This uniqueness behind their representatives allowed a quick and massive uprising of the population against their government.

Since then, various marches happened, the firsts being peaceful, the following more violent, at the capital. During more than 10 days now, the people tries to speak their unanimous voice, without concessions: the abrogation, pure and simple, of Order 883. 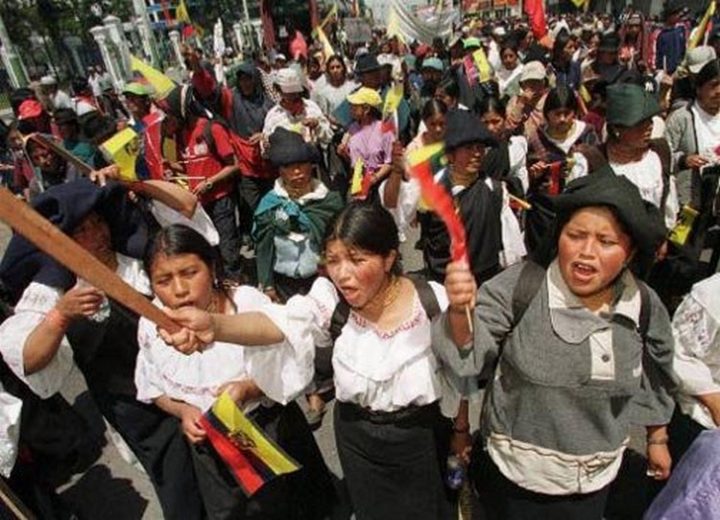 But why President Moreno came to impose this order so radically and suddenly ?

The economical situation in Ecuador : how did we come to this ?

We don't pretend we can fully explain in detail the economical problems of this country, but here are the main steps:

The main reforms that happened in the Ecuadorian politic for the past 20 years were always unfortunately linked to the country's debt.

In the end of the 1990s, the economy of Ecuador was disastrous: its GDP was falling, all economic actors (consumers, companies, investors) didn't trust any of the government decisions, due to successive bad management decisions over the country and global corruption. Inflation was only going up, as well as unemployment, leading to the most important protest the country ever experienced.

The government of Jamil Mahuad took a radical decision: "dollarise" its economy. Sucre was over (the national currency since 1884), Ecuador will now have to work under American Dollars. By doing so, the Central Bank of Ecuador looses the control of its currency production, and so of its inflation, but there are (on paper) various advantages in its favour: by deleting the control of the Central Bank, corruption issues disappear. Moreover, using a strong currency such as the American Dollar is reassuring for investors, both national and foreigners, because is a proof of economical stability in the country.

The country's debt slowly reduced during the first decade of the 2000s. In 2007, the newly elected socialist President, Rafael Correa, ordered an audit of the national debt. Conclusions of this audit show that various loans had been granted in violation of elementary rules of the International Law, allowing to save around 7 billion of dollars. In counterpart, the country turned against himself several of its creditors, including the United States. 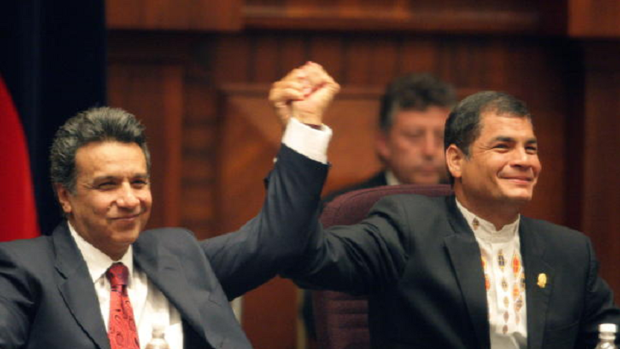 President Correa on the right, and its vice-president (and next President) Lenín Moreno on the left
Photo credits: ABC International

Following this, in order to galvanise the country's economy, Correa started several radical reforms, following the socialist Latin American trend of that time, incarnated by Hugo Chavez in Venezuela and Evo Morales in Bolivia: Health and Education budgets tripled, fight against illiteracy, reducing poverty, investment in the roads... the country develops well, but the debt that was reducing since 2000 is now growing bigger and bigger.

Sadly, now the currency production is not controlled by the Central Bank anymore, it is impossible to play with the inflation to revitalise the economy. So when Correa's successor, current President Lenín Moreno, came to power in 2017, even if he came from the same left political party and was its former vice-president, announced a series of neoliberal reforms to reduce the country's expenses: suspension of some rights, of some social protections, etc. And at the same time, offered tax amnesty for the richest people of the country.

In March 2019, Moreno negotiated with the International Monetary Fund (IMF) a 4,2 billions of dollars loan that was meant to absorb the country's debt. But as a counterpart, the government had to drastically reduce its expenses. A first wave of reforms leading to several civil employees lay off happened. 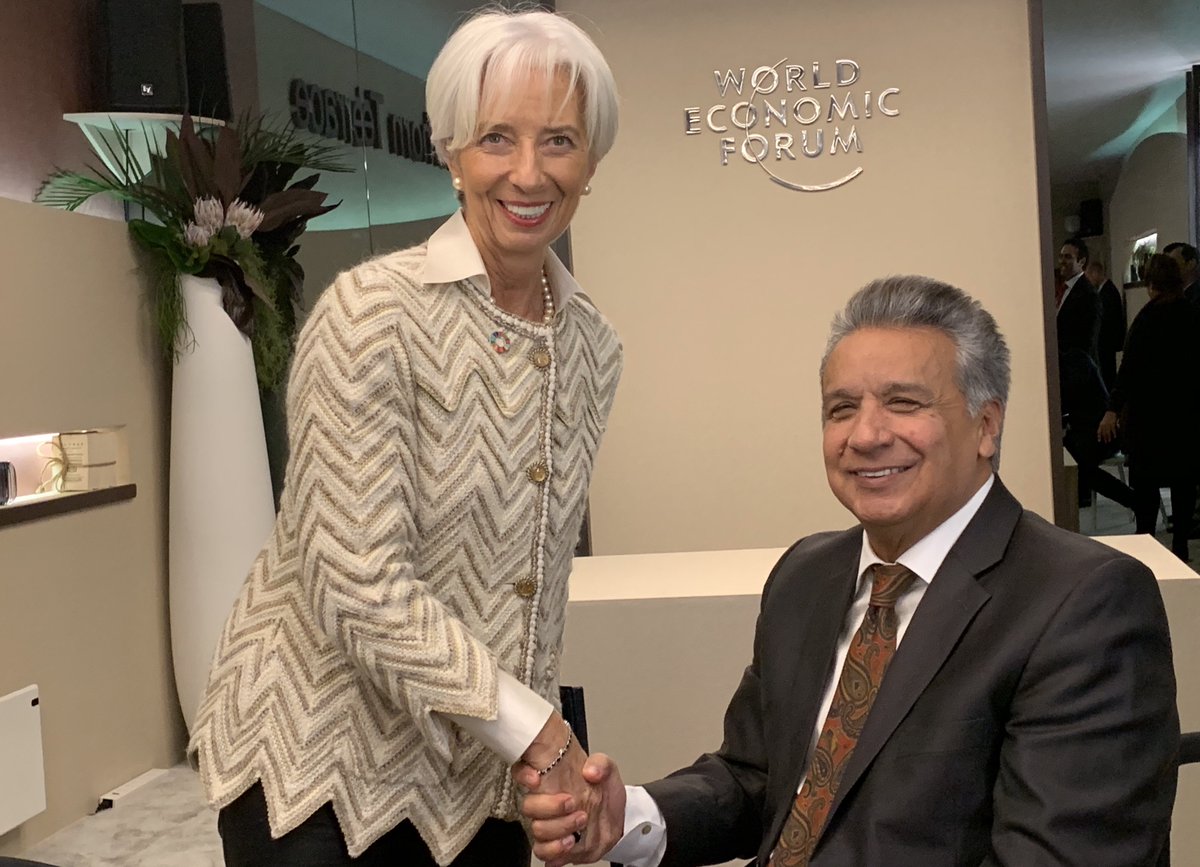 Then, in the beginning of October, President Moreno announced a new wave of reforms, including Order 883, with the results we now know.

What will happen from now ?

After 2 weeks of violent protest, President Moreno announced yesterday the removal of his problematic order. He and the indigenous representatives agreed to prepare « a new order that will cancel Order 883 » about petrol. 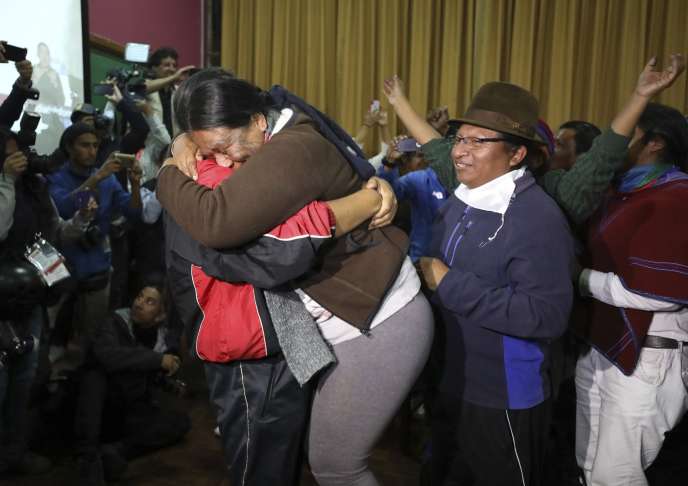 Rallying is now calming down. Following what the women from the cooperative told us as they were there participating in the marches, they are « in the wait of a signature between the 2 parts » to be sure the order is indeed revoked, but everyone « is already happy this is over, we already started to clean up the streets ».

« But we don't forget those marches and protests caused the death of several people, and hurt many more. We won't forget what this government did» say the Ecuadorians.

The rise of petrol prices that focused all the anger of the people seems now over. But concerns remain on the other pieces of the order.

Ecuador remains a country profoundly in debt, with a limited economical growth and without possibility to play with the production of its own currency. In order to satisfy the IMF requirements and respect its loan's engagements, the current government is unfortunately limited in its options, explaining the strict policy it already started to deploy and where the order from the beginning of this month was only one step...

The situation seems far from being solved for this country...